Home Advice Basic Steps to Network Like a Pro 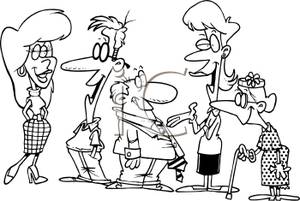 Networking is a strategic approach to the job search, it is a form of communication where the job seeker (aka you) reaches out to a potential employer. It’s as simple as that. If the facts are supposed to be trusted at least 75% of jobs aren’t advertised. These jobs aren’t hidden on purpose for malicious reason. It isn’t some malevolent plan to facilitate nepotism either. Often times, employers tend to hire through referrals. This is what experts call the hidden job market.  The only way to access it, is to effectively network.

Now you’re asking yourself, “Yes, you’ve sold me on networking… now what? How do I even start?” It’s easy to talk about networking but doing it is a whole different game.  However, if you break down the effort into manageable tasks then it becomes easier and more approachable.  To start your networking effort, follow these three steps below.

The word network here means communicating with people you know. Your friends, family, ex-classmates, people that graduated in the same university as yourself, if you’re (were) a part of clubs and groups then your club-mates become your network. Basically anyone, you’ve had meaningful conversations with are a part of your network.  Map them out and see who you can approach. It doesn’t matter if they have job opportunities or not.  The point is finding someone that knows someone who works in the industry you are working in.

Think of it as structuring your network list into clusters  that make sense. We suggest you cluster them into these categories

Once you’ve done this, it will be much easier to approach them strategically rather than just cold calling everyone you know. Having this information will allow you to create communications material that fit. For instance, you wouldn’t send an email to your professor saying Hey! What’s up? Yeah I was looking for a job, do you have one?

This is why you need to devise a communication plan for networking. This will be discussed on part 2 of the article.