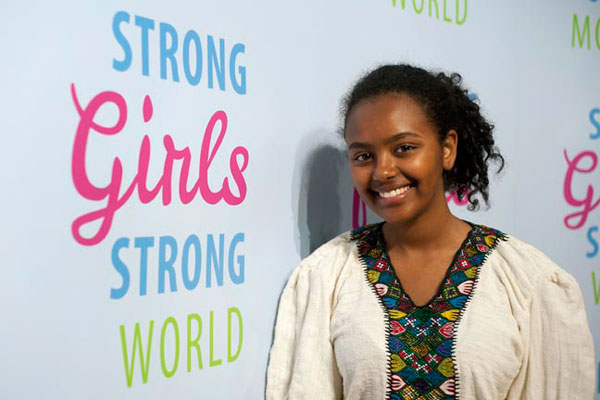 Hannah is a Symbol of Education and Change for Many Children

Hannah Godefa was born in Canada on 19 November 1997. Since the age of seven, Hannah has cultivated a desire for giving and founded a project; “pencil mountain”, which has since delivered close to half a million pencils to thousands of children in rural Ethiopia.

A citizen of Canada with Ethiopian origin, Hannah has been recognized locally and internationally and has impressed thousands with her mature and kind demeanor and her ability to make a difference in the lives of children and young people.

As a young humanitarian, Hannah speaks about how, through education, we can eliminate many problems children and youth face in Ethiopia today. Hannah is a symbol of education and change for many children. She proceeds to use her power of speech to captivate and mobilize youth to fight for children’s rights to education. Her main message is simple, but powerful: “Education is the key to success”.

On January 2013, Hannah once more, showed her commitment to the issue of children and became a UNICEF National Ambassador to Ethiopia. Her new role opened doors to see UNICEF-assisted programmes in different parts of the country in terms of Health, Education, Child Protection, Nutrition and Water Sanitation and Hygiene (WASH). While in the field, she has inspired many of her peers and especially young girls to pursue their education to the highest level. She has also developed Public Service Announcements advocating for girl’s education in Ethiopia.

On October 2013, Hannah impressed many when she made a speech at the highly successful International Day of the Girl Child at UNICEF Head Quarters on “Innovating for Girls’ Education”

On December 2013, Hannah moderated the event of the newly appointed UNICEF Goodwill Ambassador and world famous singer and song writer Katy Perry, with the Executive Director of UNICEF- Anthony Lake at the UNICEF headquarters in New York.

On 23rd January 2014, Hannah joined H.E. Mr. Ban Ki-moon, Secretary-General, United Nations, H.E. Mr. Paul Kagame, Co-Chair, MDG Advocacy Group and world leaders to participate in an interactive discussion very close to her heart “Investing in Girl Empowerment for MDG Acceleration” in Davos, Switzerland. Hannah was also one of the moderators for the speakers for the panel discussion on Global Education Skills Forum (GESF) focus on Africa in Dubai that was held from 15-17 March.

From May 6-7, Hannah attended the Partnership for Change (PFC) Conference in Oslo, Norway. On 28 May, Hannah was the youngest person to speak at the Maternal New-born and Child Health (MNCH) High Level Summit in Toronto.

On 7th July 2014, Hannah made a speech regarding the ways and means to facilitate girls’ access to education, and girls’ and women’s rights within education, including the protection against sexual and other forms of violence at the Committee on the Elimination of Discrimination against Women (CEDAW) meeting held in Geneva.

At the Girl Summit in London held on 22 July, Hannah made a speech at the closing plenary and received lots of media attention including from BBC Radio 4 Woman’s Hour special on girls and BBC World Service ‘World Have Your Say’ special edition live together with 8-10 panel lists including Ms. Zenebu Tadesse, Minister of Women, Children and Youth Affairs, Ethiopia. Prior to the Girl Summit on the 19th, Hannah shared her personal experiences of change at the #Youth for Change event.

On 22 October, 2014 Hannah spoke at the “Strong Girls, Strong World Summit” at Central Technical School to hundreds of high school students. Designed by girls, for girls, the conference was organized by the Honorable Dr. Kellie Leitch, Minister of Status of Women to mark the International Day of the Girl and to bring awareness to issues affecting girls in their communities and worldwide.

In addition, Hannah was asked to moderate a panel discussion with Anthony Lake,

Executive Director of UNICEF for the 25th Anniversary of the Convention on the Rights of the Child (CRC) on 20 November in New York. On 4th December 2014, Hannah participated in “Save the Mothers” fundraising gala as a keynote speaker addressing the importance of collectively empowering mothers on a local and global level.

Currently, she lives with her parents and little brother- Lucas, in Toronto Canada. Her most recent Awards and Nominations include:

– Awards from her school for seasoned speaker and advocate

– Award of Canadian member of Parliament for serving her community successfully