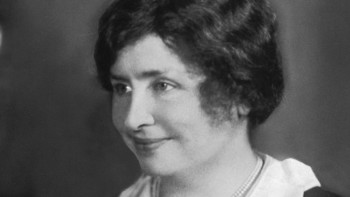 Helen Keller was born 27 June 1880 in Tusculum, Alabama. When she was only 19 months old, she experienced a severe childhood illness, which left her deaf and blind (only a very partial sight). For the first few years of her life, she was only able to communicate with her family through a rudimentary number of signs; she had a little more success communicating with the six year old daughter of the family cook. However, unable to communicate properly, she was considered to be badly behaved, for example, eating from the plates of anyone on the table with her fingers.

In 1886, Helen was sent to see an eye, ear and nose specialist in Baltimore. He put them in touch with Alexander Graham Bell, who was currently investigate issues of deafness and sound (he would also develop the first telephone) Bell, helped Keller to visit the Perkins Institute for the Blind, and this led to a long relationship with Anne Sullivan – who was a former student herself. Sullivan was visually impaired, but aged only 20 and with no prior experience, she set about teaching Helen how to communicate. The two maintained a long relationship of 49 years.

In the beginning, Keller was frustrated by her inability to pick up the hand signals that Sullivan were giving. However, after a frustrating month, Keller picked up on Sullivan’s system of hand signals through understanding the word water. Sullivan poured water over Keller’s left hand and wrote out on her right hand the word ‘water’. This helped Helen to fully understand the system, and she was soon able to identify a variety of household objects.

Keller made rapid progress and quickly overcame her bad habits. She became proficient in Braille, and was able to begin a fruitful education, despite her disability. Keller made more progress than anyone expected. She would later learn to write with a Braille typewriter.

Keller came into contact with American author, Mark Twain. Twain admired the perseverance of Keller and helped persuade Henry Rogers, an oil businessman to fund her education. With great difficulty, Keller was able to study at Radcliffe College, where in 1904, she was able to graduate with a Bachelor of Arts degree. During her education, she also learned to speak and practice lip-reading. Her sense of touch became extremely subtle.

Keller became a proficient writer and speaker. In 1903, she published an autobiography ‘The Story of My Life‘ It recounted her struggles to overcome her disabilities.

From 1918, she devoted much of her time to raise funds and awareness for blind charities. She sought to raise money and also improve the living conditions of the blind, who at the time were often badly educated and living in asylums. Her public profile helped to de-stigmatise blindness and deafness.

Towards the end of her life, she suffered a stroke and she died in her sleep on June 1, 1968. She was given numerous awards during her life, including the Presidential medal of Freedom in 1964, by Lyndon B. Johnson.