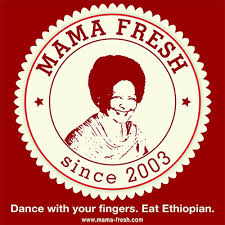 Hailu Tessema was born in Addis Ababa around 62 years ago. He graduated from high school in Ethiopia and obtained employment in the supply department of a construction company where he worked for around 15 years. During this time he began to dream of creating his own company.

In 2003, Mr. Tessema’s dream came true when he launched a family business called Mama Fresh. Mr. Tessema’s wife Konjit is the Mama in Mama Fresh, and their son Miraf Selassie runs the marketing of the business. Mr. Tessema also has a daughter, and believes that in time one or more of his grandchildren will also join the Mama Fresh administrative team.

Mama Fresh obtains the nutritious grain known as teff from a local farmers’ union with approximately 300 members. The teff is then turned over to the nearly 100 employees that work in the Mama Fresh kitchens and bakeries making the spongy pancake-like flatbread known as injera. Injera is a staple food in Ethiopia and is eaten by people of all backgrounds. It is also enjoyed outside the country, especially at Ethiopian restaurants, including several dozen in the USA, Europe, and West Africa that are supplied by Mama Fresh.

Mr. Tessema views Mama Fresh not only as a way to share Ethiopia’s traditional foods with the world, but also as a means to provide employment for people, especially women, in his home area. Around 95 percent of Mr. Tessema’s workers are female. They work at Mama Fresh Injera in Addis Ababa and receive free meals at work, including breakfast, lunch, and dinner.

Although only a bit more than a decade old, Mama Fresh Injera is already one of the largest commercial manufacturers and exporters of fresh-baked injera. Mama Fresh not only supplies major hotel chains like Sheraton and Hilton in Ethiopia, but also exports around half of the injera it produces to Ethiopian shops and restaurants.

Mama Fresh is built on good relations with the local community, local investors, and the national government. In 2014, Mama Fresh received a substantial investment from RENEW, an early stage venture capital company based in Addis Ababa, with US-based headquarters. RENEW is bankrolling the construction of a new export-focused factory for Mama Fresh that should allow the company to triple its production, which is already substantial and includes Ethiopian Airlines flying 3,500 fresh injera and traditional spices to Washington, DC from Addis Ababa four to five days each week. Injera is also being flown by Mama Fresh to Sweden, Norway and Germany.

Demand for injera is on the rise and the Ethiopian government has actively helped Mr. Tessema build his successful business. The construction of the new 2,500 square meter factory, which is anticipated to near completion by January 2016, is being built on land that was offered to Mr. Tessema by the government at a nominal cost. Mr. Tessema believes that with the new facility that he will have 300 to 400 employees within five years. His optimism is realistic. Ethiopia has one of Africa’s fastest growing economies and teff has the potential to be a new ‘super food’ due to being gluten-free, and high in iron, calcium, and protein. Teff flour also is versatile and can be used to make any flour-based food, including bread, pasta, pizza, cookies, and tortillas.

In 2012, less than ten years after Mama Fresh’s founding, Mr. Tessema and his innovative business were recognized by Ethiopia’s Prime Minister for their contributions to society. In 2015, Mama Fresh and its founder Mr. Hailu Tessema were recognized once again, this time by the country’s Ministry of Urban Development, Housing and Construction, as the number one small enterprise exporter in all of Ethiopia.