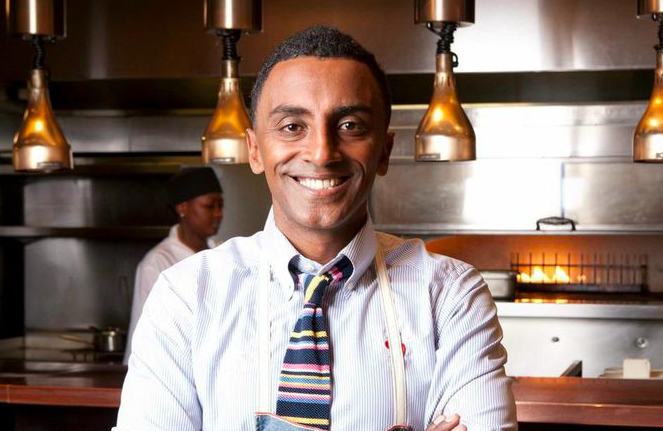 Marcus Samuelsson was born in Ethiopia in 1971. After his mother died from tuberculosis, he and his sister Linda were adopted in 1973 by Ann Marie and Lennart Samuelsson, with the family living in Sweden.

Growing up, Samuelsson says he went fishing with his father and his uncles, catching crayfish, lobsters, and mackerel, which they later smoked and preserved. Another early culinary touchstone can be found in the time Samuelsson spent with his grandmother, Helga. She was a professional chef and taught him how to pickle vegetables and make a variety of dishes and treats, and these experiences gave Samuelsson a new appreciation for fresh and local foods.

The 1980s put Samuelsson officially on his life’s path when he enrolled at the Culinary Institute in Gothenburg, Sweden. After graduating in 1989, he apprenticed in Switzerland before moving on to France in 1993. That would be the year Helga died as well, but her influence would live on. “I owe her my inspiration and dedicate my passion to her,” Samuelsson has said.

In 1994, Samuelsson left for the United State and began an apprenticeship at New York’s Aquavit, quickly working his way up to become executive chef. In 1995, just a few months after being named executive chef, he received his first three-star rating from the New York Times—at 23, the youngest chef to receive the honor. Samuelsson was awarded the James Beard Foundation’s Rising Star Chef Award in 1999, and in 2003 the foundation named the chef as the best in New York City. Also in 1999, after nearly 30 years away from his country of birth, Samuelsson made a return trip to Ethiopia and met his Ethiopian father and 18 brothers and sisters.

Success has come Samuelsson’s way more and more steadily. His first book, Aquavit and The New Scandinavian Cuisine, was published in 2003, and his next, The Soul of a New Cuisine: A Discovery of the Foods and Flavors of Africa (2006), was named Best International Cookbook by the Beard Foundation in 2007. Later books include New American Table (2009) and Yes, Chef: A Memoir (2012)

In 2009, Samuelsson married model Gate Maya Haile in Ethiopia and had the honor of cooking the first state dinner for President Barack Obama.

Samuelsson has also opened several restaurants, the first being Red Rooster in New York’s Harlem neighborhood in 2010. It’s been followed by Ginny’s Supper Club, also in Harlem, American Table Cafe and Bar, located at Lincoln Center, and several others around the world. He has hosted TV’s Inner Chef with Marcus Samuelsson and served as a judge on the popular series Top Chef as well.

In July 2014, Samuelsson will star in the series The Feed alongside Top Chef judge Gail Simmons and food blogger Max Silvestri on the newly launched FYI network.

The recipient of consecutive four-star ratings from Forbes magazine, Samuelsson is an ambassador for the U.S. Fund for UNICEF and serves on the board of directors of Careers Through Culinary Arts program.