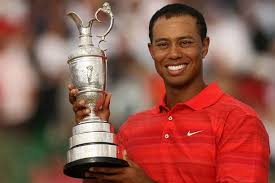 Pro golfer Tiger Woods was born in Cypress, California, in 1975. He won the U.S. Masters at Augusta in 1997 with a record score at age 21, making him the youngest man and the first African American to earn the title. Woods won another 13 majors and was named the PGA Player of the Year 10 times over the next 12 years, but he struggled to regain his top form after personal problems surfaced in 2009.

Athlete Eldrick Tont Woods, better known as Tiger Woods, was born on December 30, 1975, in Cypress, California, the only child of an African-American Army officer father and a Thai mother. When Woods was a child, his father began calling him “Tiger” in honor of a fellow soldier and friend who had the same moniker. Around this same time, Woods learned to play golf. His father, Earl, served as his teacher and mentor. Around the age of 8, Woods had become extremely proficient at the game, even showing off his skills on television shows such as Good Morning America.

Woods studied at Stanford University, and won a number of amateur U.S. golf titles before turning professional in 1996. He shot to fame after winning the U.S. Masters at Augusta in 1997—with a record score of 270—at the age of 21. Woods was the youngest man to earn the title, and the first African-American to accomplish this feat.

In 2003, among Woods’s five wins were the Buick Invitational and the Western Open. The next year, Woods won only one official PGA Tour championship. While he may have had some challenges on the course, his personal life was running smoothly. Woods married his longtime girlfriend Elin Nordegren, a Swedish model, in October of 2004.

Returning to dominate the sport, he won six championships in 2005 and was voted the PGA Tour Player of Year for the seventh time in nine years.